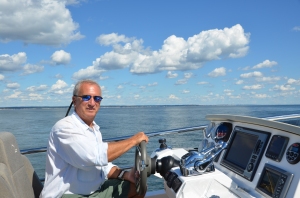 Hey out there. Just to get things started up, and for those of you not familiar with who I am and what I’ve done,  I thought I’d introduce myself with this industry bio:

Capt. Ken Kreisler began his nautical career in high school, cleaning hulls, caulking seams, and painting topsides. During school vacations, he traveled from New England to the Bahamas aboard commercial and deep-sea fishing vessels. He became a boat owner and, with his 42-foot Maine-built lobster boat, worked his way through undergraduate, graduate, and post-graduate degree work as a commercial and charter yacht fisherman.

He also earned a 100-ton Master’s License and instructed others who were hoping to do the same. Also active in the charter industry, he worked aboard private yachts along the East Coast and in the Bahamas and oversaw the restoration of a 1926 Trumpy-built yacht. He was also the captain of the Honey Fitz, previously JFK’s yacht and was also involved in the 1976, 1986 OpSail events in New York Harbor as well as Fleet Week 1988. In addition, Ken was instrumental in writing the Marine and Fisheries curriculum for Kingsborough Community College and is the author of several children’s books and the recipient of the John Burroughs Award for Nature Spy, published by Simon & Schuster. On the marine side, he has won a number of Boating Writers International as well as Reader Survey awards for technical, boat test, and travel writing. He is currently at work on TRAWLERS: History & Design as well as penning his first novel for teens.

Capt. Ken is one of the most well-recognized and respected boating experts and has over 25 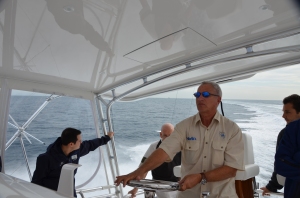 years of boating industry experience. Since 1994, he had been a leading member of Power & Motoryacht Magazine’s highly valued boat test team. As the magazine’s senior editor, he wrote the award-winning monthly “Maintenance Q & A” and “Cruising” columns as well as various feature stories, technical articles, and boat tests. Ken was also the coordinator of Power & Motoryacht’s Boat Test program, considered the standard in the marine magazine industry. He was a major contributor to the yearly BIG GAME TOURNAMENT GUIDE and also came up with the idea for, and was the editor-in-chief, of VOYAGING magazine. Ken went on to helm the PMY TV & Video program and was the on-camera host and producer/writer of PMY TV, available on the magazine’s popular Website as well as being broadcast on Comcast, the nation’s largest cable provider, as part of its Website services. At the time, PMY TV also had prime time allotment on The Water Channel, broadcasting over satellite providers DISH as well as Time Warner and Cox cable systems to more than 12 million households. And with the addition of European distribution through a strategic alliance with The Sailing Channel, PMY TV was also available to an additional six million viewers on the other side of the Atlantic Ocean with translated shows in French, Italian, and German.

In 2008, Ken joined the masthead of YACHTING magazine as the publication’s Deputy Editor, going on to become the magazine’s Senior Video Director in order to develop relevant content and interactive video for the company’s Web site. His work can also be seen in some of the industry’s leading magazines including POWER & MOTORYACHT, YACHTING, MARLIN, and SOUTHERN BOATING

Ken is presently the Editorial Director of the Boat & Yacht Report, an on line project that offers a viable alternative to print media in a unique, cutting edge boating magazine format featuring relevant, up to the minute editorial content, interactive video, blog sites, photo galleries, upscale travel and food presentations including boat and yacht destinations, fishing segments, and many other distinctive features covering the marine industry with a hands on the wheel, resin to rudder attitude. You can visit the site at captken.wordpress.com 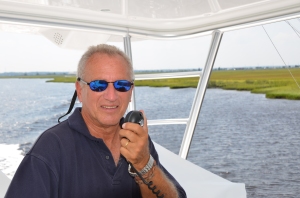 As content, videos, and photos come in, they’ll be going up. There will be lots of interesting travel destinations that I’ll be sharing with you as well as the latest information for all you boaters. If you need to get in touch, just leave a posting by using the COMMENT button in the lower right hand corner of the posting page. I’ll make sure to get back to you.

Until then, fair winds and following seas. I hope to see you around the docks, and even better, out on the water. -Capt. Ken

Posted by captken on March 8, 2011 in Uncategorized