Necessity Is The Mother of Invention

Whether due to the ongoing energy crisis, the global economy, or a host of other factors all working together to exert a strong tidal pull on the boating industry, there are several forward thinking designers and engineers out there whose ideas may warrant a closer look by the status quo.

The origin of this most recognized of proverbial sayings chosen to be the title of this discussion is, for the most part, unknown. While some scholars, who often spend lifetimes studying such esoteric endeavors as tracking down the undeniable source of said adage and others —and kudos to them—however shipmates, I choose to follow yet another path in my own pursuit of accumulated knowledge, passing neither pro or con judgment on these donnish deeds. In fact, and in praise of said dedicated and erudite study, we have such recognizable and attributable sayings as the treasured, “ A-wop-bop-a-loo-bop-a-lop-bam-boom,” by none other than Richard Wayne “Little Richard” Penniman; or the emotional, “Yo, Adrian,” flawlessly delivered by Sylvester Stallone in the 1976 film, Rocky; and just to drive things home, who can forget this memorable gem from Charles II (1630–1685), who was king of England, Scotland, and Ireland: ‘Let not poor Nelly starve,” referring to one of his many mistresses, the actress and commoner Nell Gwynn, as he lie on his death bed. Or as my good friend Capt. Chris Kelly would say, “Go no further.”

The point here readers is that we seem to be entering an era where the way things were, are not necessarily the way things are going to be. For example, let’s take a quick look at moving a boat through the water. (Sailboaters need not read any further; the technical information that follows really has nothing to do with what they do. However, I humbly and respectfully beseech and request my ragbagging brethren to push on if merely for the enjoyment of partaking in my wordsmithing.)

For most of us who enjoy our fishing, cruising, or however we involve ourselves in the lifestyle, getting from Point A to Point B, perhaps on to Point C and the rest of the alphabet and back, means we have to consider our fuel consumption. And to address this important concern, I would say that most of the established and respected boat designers, builders, and engine manufacturers around the world have taken this cause under careful scrutiny and thought: To wit, the enthusiastic acceptance of Volvo Penta’s IPS and the Cummins/Mercruiser Zeus systems.

Now, I’ve just begun to do some digging is this area and came up with three companies that  appear to be into technology and a way of thinking that might be the start of something new. Just have an open mind. Think iPad, okay, and what a gizmo like that will eventually lead to.

The first up here is the M Ship Company out of San Diego, California. Founded in 1998 by Chuck Robinson and Bill Burns, M Ship is a service-disabled, veteran-owned small business specializing in the design, development and delivery of innovative marine concepts for the military, commercial and recreational markets. 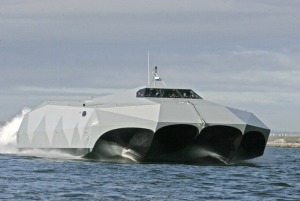 The M Hull underway takes form and function to a new place.

To say they are inventive falls far short of the reality of their products. Case in point; The M80 Hull. Known as The Stiletto, the twin M-hull vessel is 88 feet in length with a 40 foot beam, providing a rectangular deck area equivalent to a conventional displacement craft 160 feet in length. The vessel’s draft fully loaded is three feet and is designed for a speed of 50-60 knots. Right now, it’s in military and drug interdiction use but I don’t think it’s too much of a stretch to see a yacht version slipping down the ways. 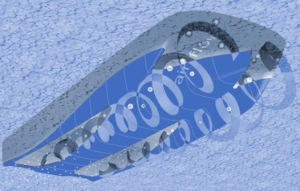 According to the M Ship Company, the M-hull’s advanced planing-hull technology provides superior advantages over the more traditional designs. As shown in the illustration here, the M-hull’s geometry is unique because it consists of three interrelated features that improve ship performance-the Central Displacement Section, the Planing Tunnels and the Rigid Skirts.These include ride quality, speed, stability, range and the ability to carry payloads. The reduction of the “drag hump” offers very efficient cruising speeds not normally associated with planing craft and M Ship has done extensive studies with government and academic support in order to validate these benefits. Its test data and video are available upon request. www.mshipco.com

Next is the Axcell 650, a boat I had the opportunity to pay a short visit to while at this past Palm Beach Boat Show. From the outside, the Axcell 650 Catamaran Sport Yacht offers a sleek, eye-catching low profile design with distinctive ‘gill-slit’ intakes on each side, which, by the way, and as I would soon find out, have been specifically designed for an additional and important performance function. But what really began to interest me was something written on the banner that stretched across the transom: “With Patented HybridAir™ Technology.” Now that was something that pinged my radar and waiting my turn to get aboard, listened carefully from dockside as I started to pick up some buzz words from someone wearing an Axcell shirt.

Brian Barsumian, who along with his dad Bruce, are the principals in the company responsible for this daring design and technology. They call it MACS Research Inc., the capital letters standing for Multi Air Cavity Ships™ and have been at it for some 13 years now with the result of their research and work sitting right there in the dock.

The 650, designed by J.C. Espinosa of Stuart, Florida-based Espinosa Inc., is a beautiful looking boat both inside and out. That’s my opinion. Some simply do not like the catamaran styling nor the lines. However, I found her to be a head turner and mine was going back and forth, looking here and there as I got the cook’s tour with Brian. I hope to get back on with both Bruce and Brian at a later date for a comprehensive sea trial and walk through, and perhaps a sit-down with Mr. Espinosa as well, but for now, I noted how well this prototype is finished off in yacht quality fashion with copious amounts of room available enabling her owners and guests to be away from the dock for long periods of time. And there’s a 16-foot, 90-hp RIB tender tucked into a garage in the stern.

The lift fan canister (rear) is clearly visible in the 650’s engine room.

With lots of folks queuing up on the dock for a look-see, and realizing of course that the Barsumians were eager to show their boat, I slipped into the starboard sponson’s engine room with Brian for a quick tour. I got the layout and technology very quickly. The boat has been designed to pump low pressure air, much like a hovercraft does, via a pair of automated lift fans working off the twin C-18 Caterpillar 1,150-hp turbo diesels. And yes, those ‘gill slit’ intakes are all part of the technology that gets this 59,000 pound vessel cruising, according to the Axcell literature, along at a 38-knot cruise speed. This is a very cool boat and one that I am definitely coming back for. Stand by. I’ll let you know when it’s happening. www.axcellyachts.com

My third offering on this topic is by Effect Ships International (ESI) AS of Sandefjord, Norway, who also seem to be playing with the hovercraft—or ASV, for air supported vessel—technology as well, and have come up with a prototype they call the M65. And here’s where you have to put in some visionary work and ignore the boxy, unadorned test vessel pictured here. As with the iPad analogy, think Patrick Knowles design or something out of the Trinity yard.

With that said, ESI has sunk some $10 million into its research and development of the M65, garnering the Innovation Award at the 2011 European Powerboat of the Year contest. In a nutshell, the concept calls for a special underwater shape to the running bottom of the hull complete with a large cavity to trap the blown in air, courtesy of a fan mounted in the bow. At the stern, a special flap closes off the cavity, trapping the air within. For this prototype, ESI used a fan driven by a D3 Volvo Penta diesel but envision using electric power from a genset or from a hybrid

Bow intakes allow air to be drawn in.

main propulsion system. The illustration above also shows the side rails that prevent the air from escaping. According to Ulf Tudem, the company’s general manager, the propulsion system can be pods, jets, outdrives, fixed-shaft, or surface piercing. When the main propulsion system is engaged, the M65 accelerates and gets on plane much faster than conventional boats because it doesn’t need to get over the proverbial hump. Below is a side-by-side test ESI performed between a Princess 62 and the M65 equipped with IPS. While there are obvious give and takes, there is a marked difference between horsepower, range, and fuel consumption. http://www.seseu.com

Wrapping this one up for now, do you think Orville and Wilbur Wright ever envisioned the Space Shuttle and imaginative risk-takers like Sir Richard Branson? We’re going to try and get some of the experts to wade in on this ASV technology so standby. Until then, my final thought here is a simple one: “The dog would have caught the rabbit if he didn’t stop to take a leak.”

Posted by captken on May 22, 2011 in Uncategorized