A milestone anniversary deserves a special party and we’ve got one planned for the 2011 Mid-Atlantic $500,000!  Known among tournament participants along the east coast and beyond for its large cash purse, great fishing, exceptional dockside service and nightly hospitality, this year’s event is indeed special as we celebrate 20 years of what Al Ristori of Salt Water Sportsman dubbed back in 1992 “An unequalled big game event promoting conservation, camaraderie and sportsmanship.”  Nightly festivities have become the norm for Mid-Atlantic $500,000 participants though this year will be a little different.

The week-long celebration runs from Sunday, August 21 through Friday, August 26 and special events are planned for both tournament locations.  Canyon Club Resort Marina will serve as Tournament Headquarters for boats sailing from Cape May and Sunset Marina in Ocean City, Maryland will host participants who choose to sail from that port which has been designated as the event’s only satellite port.  While crews keep busy during the day on the water, dockside activities, both day and night, offer a chance to relax, renew old friendships and shares stories about the day’s fishing activity and numerous special events are planned.  As an early entry incentive, Engel USA will offer the first 125 paid entrants a 30-quart cooler/dry box from their Engel Adventure Line of products, which is perfect for transporting bait and other fishing necessities.  Seakeeper is offering a free Basic Entry of $6000 to the Mid-Atlantic $500,000 for anyone purchasing their advanced Gyro Stabilization System by August 26, 2011.  For further information contact Seakeeper at 410-326-1590 or at sales@seakeeper.com.

Cape May Brewing Company will host a tasting of their special Mid-Atlantic 500 “Fish On” beer on Wednesday night in Cape May.  KRU82, the new, exciting vodka from Holland, will offer tastings of their product at both ports during the tournament as well.

The Mega Marlin Raffle has been expanded and will benefit the Guy Harvey Foundation and the Recreational Fishing Alliance and a wide variety of prizes has been assembled.  Additionally, the ever popular 50/50 will culminate on Wednesday night while the Mega Marlin Raffle’s $10,000 cash drawing is slated for Friday night!  A special Wednesday night sit-down dinner with table service will be offered under the tent at Sunset Marina for Ocean City, Maryland participants and some exciting gifts and prizes to help commemorate the tournament’s 20th Anniversary will also be provided!

BMW of North America, the exclusive automotive sponsor of the Mid-Atlantic $500,000 will be onsite each day of the tournament showcasing the newest BMW models including the all-new 2012 BMW 6 Series.  In addition to the 6 Series, BMW will feature the BMW 5 Series, 7 Series, Z4 and X5.  Test drives of each model will be available at the Canyon Club Marina Ship’s Store from Sunday to Friday from 11 a.m. to 6:30 p.m.  Additionally, ZF Marine will demonstrate their new pod drive system aboard their new ZF Marine 50’ Viking demo in each port.  Also, BMW and ZF Marine will jointly hold an exclusive reception during weigh-ins on Thursday evening for their customers and prospects.  Participants should check their Captain’s Packets for invitations and details. 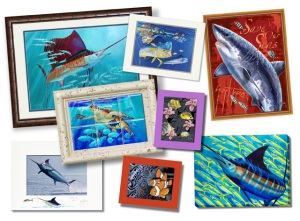 August is officially “Guy Harvey Month” at South Jersey Marina and a brand new display of Guy’s latest artwork and merchandise will be on display.  Harvey has been a cornerstone and a great friend of the Mid-Atlantic $500,000 since its inception and his never ending efforts in regard to our sport is greatly respected and appreciated around the globe.  In addition to his exclusive, private appearances at the tournament, the world renowned wildlife artist, conservationist and researcher will be available for a rare public northeast signing session at the South Jersey Marina Ship’s Store on August 23 and August 24 from 1 p.m. to 4 p.m.  The public is cordially invited to meet Guy personally and have him sign his artwork, t-shirt or other items baring his art.  The Ship’s Store at South Jersey Marina is located at 1231 Rt. 109, Cape May.

In Cape May, a very special east coast appearance by country music star Colton James will take place.  Colton’s motto is “101 Proof Country” and he will appear there with his band to play his latest hits including Brave Men, a powerful tribute to our American troops.

Posted by captken on August 7, 2011 in Uncategorized