Largemouth bass angler Rick Clark of Crystal River, Florida, recently went on the fishing trip of a lifetime to Northern Michigan, guided by none other than BoatUS Angler member and outsized television fishing show personality Mark Zona. Clark’s girlfriend, Layne Lowrey, also of Crystal River, won the fishing trip in a contest for members of BoatUS Angler, and gifted the prize to Rick, proclaiming herself the “best girlfriend ever”. Of course Rick agreed (as would any wise angler), and while fishing with the “Awesome Fishing Show” host in the backwoods near Traverse City, Michigan, Clark said he learned three important things: 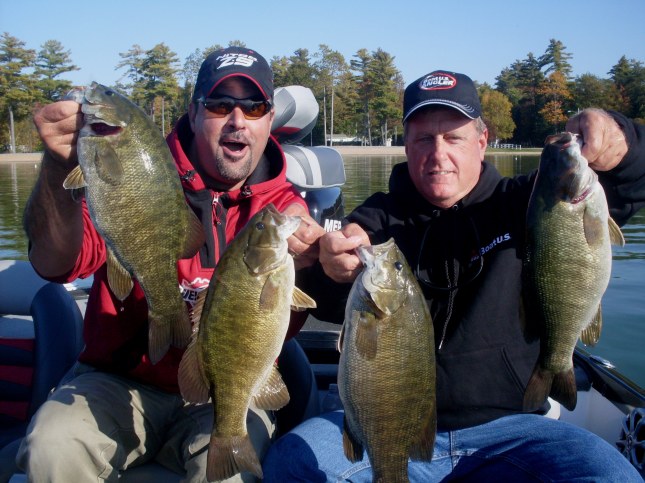 1. Unlike his own home waters of Florida, Clark was amazed at the beauty and clarity of the Northern Michigan waters, which Zona affectionately calls “smallmouth holy land.” Said Clark, “At home (in Florida), we cast anywhere you think they may be hiding. In Michigan, you put it right in front of them and hope they don’t spot you first. Mark popped the lure right in front of them every time.” This confirms that Zona, a former competitive bass angler, certainly hasn’t lost his touch while ascending to the television broadcast booth (Zona hosts his own “Awesome Fishing Show” and is also co-host of the highly popular, annually televised Bassmaster Elite Series).

2. Mark Zona has never eaten an egg in his life. Or, at least an egg he can see, says Clark. Just how did Clark find out this meaningless tidbit if information? “I noticed he didn’t have anything for breakfast,” said Clark. “When I asked him if he was going to eat, he looked at me and said with a straight face, “I’ve never eaten an egg in my life.” Clark said Zona later ate two bananas after catching a few giant smallmouth “fence pandas,” as Zona calls them.

3. What most impressed him was Zona’s ability to find the myriad lakes. “He knows all kinds of places,” said Clark. “You’re driving along through the woods thinking you’re lost, and then suddenly, he’s pulling up to a ramp at another beautiful lake. I have never been to Michigan and was greatly impressed. I want to go back soon.” When asked about Zona’s boat ramp technique with his new Nitro boat Clark said, “I give him an A- as he did forget to unhook the bow winch once or twice.”

To view a video of Zona with the newly-nicknamed “Florida Terminator” Clark, or to learn more about BoatUS Angler, a membership program that offers both on-the-water and on-the-road towing assistance, fishing boat insurance and other benefits for boat-owning anglers, go to www.BoatUSAngler.com.

BoatUS Angler members will have another chance to win an Awesome Fishing Trip with Zona in 2012. Contest updates will be posted on www.BoatUSAngler.com.

Posted by captken on November 13, 2011 in Uncategorized