The Mikelson 43 SF shows off her cockpit and salon.

The Mikelson 43 Sportfisher gracefully combines the fishing elements of a large flybridge and tournament station with a comfortable, spacious interior.  After fitting his boat with a Seakeeper gyro, the savvy owner of SAM I AM now better enjoys time spent aboard in comfort.

“There’s a definite trend toward putting gyros on smaller craft,” said Mike Elias of Mike’s Boatworks, the Seakeeper servicing dealer who installed the gyro.  “There’s really no way anyone would add stabilizing fins to boats this size, as there isn’t enough space and they’re not economically effective.  Seakeeper is opening up a market for people who want a smooth ride and stability, so they can spend more stress-free time on the water.” 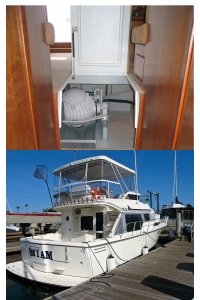 A Seakeeper gyro (top) fits right in aboard the Mikelson 43.

With the help of The BoatYard in Marina del Rey, California, the gyro was mounted in a storage area forward of the engine compartment under the main salon.  Only a 30″ access hatch was needed.  “Although the gyro is underneath living space, it’s pretty much silent,” said Elias.  The owner agrees, saying, “I think I can hear the generator more than the gyro.”

“We didn’t have to tear the boat apart, and The BoatYard team was on top of it all.  I’d work with them again in a heartbeat,” said Elias.  “Turnaround time was phenomenal, just 4 weeks from the order date to sea trial.  It’s so simple, almost any boat owner could easily retrofit this gyro on a boat over 35 feet.”

On the day of the sea trial, “Whitecaps were crashing against the Marina del Rey breakwater and we had 6-8′ swells,” said Elias.  “The boat was getting tossed around, and when we turned on the gyro, she simply leveled out.”  The owner commented, “There was a small craft advisory, and the gyro did have a significant impact in reducing the boat’s rocking.”

Soon after commissioning, SAM I AM‘s owner had further proof of Seakeeper’s performance.  He hosted a cocktail party on the flybridge for 25 guests near Catalina Island.  “As usual the water was a little rough,” he said.  “The gyro kept us stable, especially compared to other boats that were rocking back and forth, and made launching the dinghy a lot easier.”

“What really impressed me was that after the party, we switched off the gyro, and it really made a difference.  Dishes up on the flybridge table that had been sitting there, stable, for 3 hours literally went flying moments after we shut it off.  That told me, ‘yes, this thing works.'”

He continued, “In previous years, even though conditions were pretty similar, a quarter of the guests fell ill, some sick enough to want to leave immediately.  This year the party was much more enjoyable.”

Based in San Diego, Mikelson builds custom sportfishing and pilothouse yachts from 43′ to 75′.  The 43′ and 50′ sportfishers are available with the Cummins Zeus Pod Drive engine package.

Posted by captken on January 12, 2012 in Uncategorized