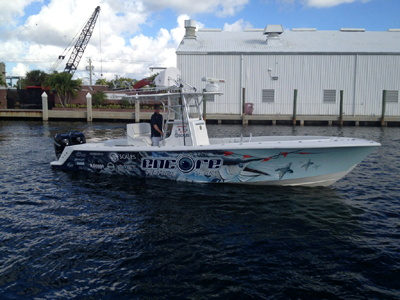 GOST and Team Encore’s Sea Vee 32 with Capt. Jamie Bunn at the wheel
have joined forces to help sick children.

Vessel security, tracking and monitoring systems supplier GOST (Global Ocean Security Technologies – formerly Paradox Marine) has always been a stand up company, helmed by stand up professionals who know their business. Now, President and CEO Jay Keenan and Director of R&D Brian Kane, along with the rest of the GOST work force has really shown their mettle.  GOST  is sponsoring Team Encore for the current season of sailfish tournaments in southeast Florida. One of the most important aspects of the team’s effort this year is a ‘Sailfish for St. Jude’ fundraising campaign to help raise money for St. Jude’s Research Hospital, whose mission is to advance cures for pediatric disease.

The captain of Team Encore and the team’s Sea Vee 32 is Jamie Bunn of Bluewater Movements. “Team Encore is excited to have GOST as one of the sponsors for this season. The team is very passionate about the cause for St. Jude Children’s Hospital. The combination of many small donations for each sailfish released can raise tens of thousands of dollars for this great charity,” Bunn said.

Team Encore started the season with an impressive 32 for 38 sailfish releases at the recent Silver Sailfish Derby in West Palm Beach.

In addition to financial support of the team, GOST has provided a NT-Evolution Security, Tracking and Video Surveillance system to watch over the vessel and capture some of the sport fishing action.

The NT Evolution uses a fourth generation tracking website which incorporates advanced Google & Bing mapping interfaces and uses the Inmarsat network of satellites with 99.99% reliability mandated by the IMO. It is the ideal solution for boats with limited space who want to hide the unit and strictly rely off key fobs. An IP rated enclosure protects the GOST wireless technology at the core of the system. This allows the NT Evolution to use the extensive range of marine-rated wireless sensors for security and monitoring in combination with the GOST Nav-Tracker satellite tracking product line.

The system can accommodate up to 32 wireless sensors, a hardwired zone input,16 key fob remotes and up to 8 wireless relays which can control AC or DC functions onboard the vessel. The wireless relays can be used to flash the lights or sound a siren on alarm and can be controlled from the key fob remotes. For customers who keep their boat docked behind their house it is possible to tie one of the wireless relays into the house’s security system to go off when the boat is being tampered with or stolen from the house.

For more information on how to donate to the Team Encore ‘Sailfish for St. Jude’ fundraising campaign, visit Encore Fishing Team on Facebook. A simple post on the wall indicating the amount pledged per release will start the process – donations will not be collected until the end of the season. The current number of releases for the team so far is 42. Estimated number of releases by the end of the season is 75. To make a fixed amount donation, visit Donate now to the Sailfish for St. Judes camgaign.

For more information about GOST NT Evolution and other GOST marine security and tracking products, visit www.gostglobal.com or call 1+954.565.9898.

Posted by captken on February 4, 2012 in Dock News