I like fishing because it’s so different from what I do for a living,” he says, his voice tinged with the easy-on-the-ear drawl of North Carolina, where he lives. “It’s one of the very few things that really gets me away from my job.” He smiles for a moment as he hears himself say “job.”

Lady Sarah, the Jarrett Bay 53 foot Custom that was built for Curtis.

That’s from a 2002 interview I did with golf great Curtis Strange aboard his 44’ Jarrett Bay built sportfish boat. After that came another Jarrett Bay build, this time a 53’ Custom. But just as with his back to back U.S. Open wins in 1988 and 1989, Curtis was looking for boating’s version of a hat trick.

Now, Jarrett Bay Boatworks is excited to announce details of its new 32’ Custom Center Console project quietly started in June 2012 for one of golfing’s most notable and respected icons, and now three time Jarrett Bay owner, Curtis Strange. Almost as avid an angler as golfer, Strange has embarked on his latest Jarrett Bay build to best suit his desire to fish both North Carolina’s sometimes challenging offshore waters as well as its oft-shallow inshore sounds.

Differing from Jarrett Bay’s semi-production 34’ walk-around model, this 32’ custom layout is an open concept with both forward bow and console bench seating. The custom console bench features two Release Marine helm chairs, flush mounted rod holders and a 37-gallon live well aft of the chairs. Like her larger sisterships, the Jarrett Bay 32’ Custom provides added features like a transom fish box, and ample storage spaces in the console itself, as well as the helm chair bench.

Rounding out her stylish Carolina Flare® lines, she is complemented by a custom Bausch American Towers T-Top, teak covering boards, teak toe rail and a roomy 45 sq. ft. teak cockpit deck aft of the console. Although fitted with an Armstrong motor bracket rated for approx 700hp, Curtis is opting for fuel efficiency to his nearby fishing grounds with twin 300hp Yamahas. 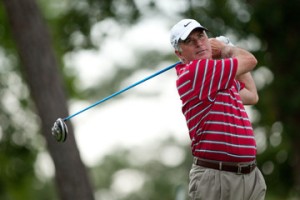 Just as Curtis methodically examines almost every PGA tour member’s stroke in his role as an ESPN analyst, he has applied the same keen prowess to identifying the various aspects of what he wants in a fishing boat. He has studied their interrelations from construction to application on his past two Jarrett Bay builds to create a truly custom, no-nonsense center console built for hard-core inshore and offshore versatility.

For more information on the Jarrett Bay 32 or any of its other fine custom-built boats, visit the company Website at http://www.jarrettbay.com